My History In Roller Skating 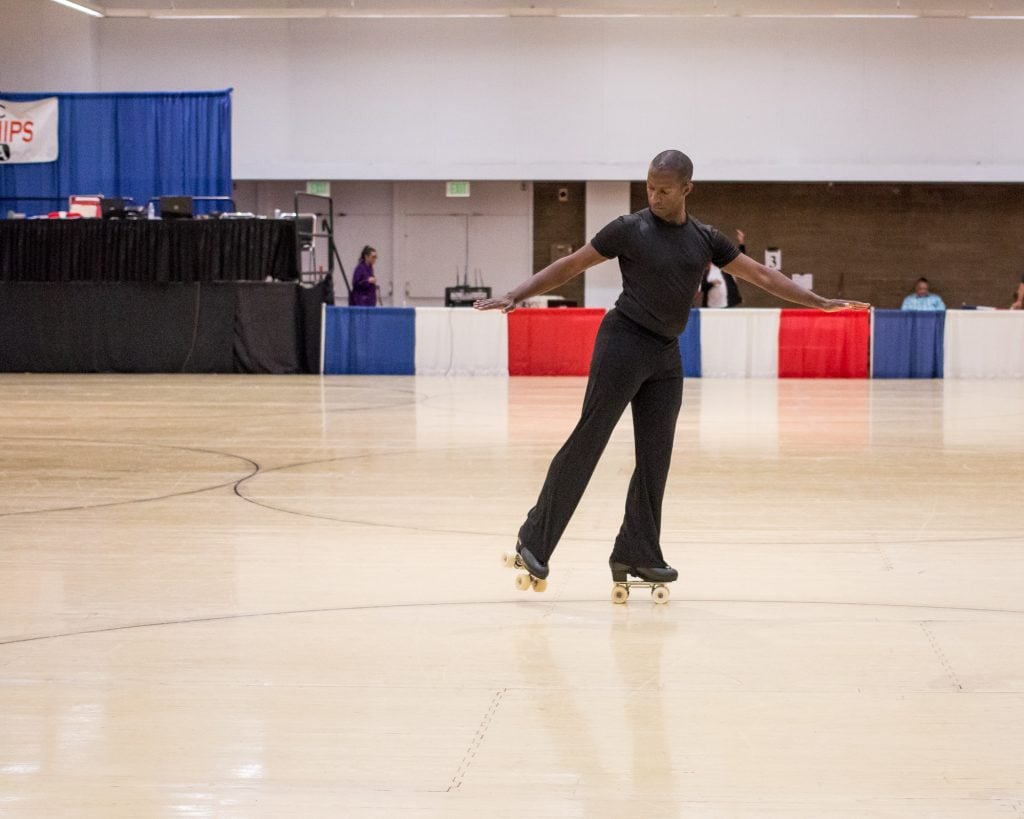 I’ve been artistic Roller Skating since I was 17. I skated a handful of times when I was kid when my parents took me to our local rink but never really skated until I borrowed my older brother’s rollerblades. I practiced outside in them every day even though they were four sizes too big for me. I eventually saved up and got my own inline skates and started skating at my local the rink. Within a week I was very strong at skating forwards and in another week I got good at skating backwards. After I graduated from high school I didn’t have much to do until college started other than working my part-time job, so I was at the rink all the time. That’s when I met my first Coach Sandy.

I noticed she was teaching a lot of the young kids and I would try to mimic what they did. I was getting good just by watching, but I wanted to learn more. That’s when I approached her and asked about lessons. She had also noticed me and asked how long I had been skating. I told her just a few weeks! She was impressed and took me on as a student. So began my artistic roller skating journey. 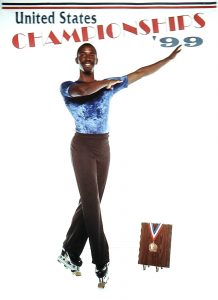 I skated local competitions and went to Jr. Nationals and Nationals on quads and inlines until I was about 25 or 26. I stopped skating because I had too many injuries with my knees, shins and shoulders, and at that point in my life I needed a break. During my break from I couldn’t just sit around doing nothing. I was very athletic and started taking karate and jujitsu. Karate and jujitsu was another activity that I picked up rather quickly. I learned a lot in a short time, but there was still much to learn and understand much like roller skating. I did karate and jujitsu for over 10 years and still practice on my own since I’m no longer living near my home dojo.

My wife got me back into skating just before I turned 39. I had gained over 40 lbs since I stopped skating and we needed something to get us both back into shape. Over my time off from skating competitions, I still went to the rink occasionally for sessions, but I didn’t have the stamina that I used to have. I couldn’t last a full session because of fatigue. My wife wanted to get better at skating, so she started to take lessons from one of my previous coaches’ partners, Jeff. She only had lessons for a few months before we decided to move from VA to CA where she was originally from. When we got to CA, we started to go to the local rink here and my wife found Coach James to help her continue her journey.

While I had no intentions on skating competition again, Marcy’s coach could see I was a skater previously before and encouraged me to skate again. I figured what the hey, I’ll give it a go one time. Coach James was big on figures and dance but I only liked to do freestyle. However, my old rink had a rule that if you do freestyle, you also have to do figures! I still stick to this rule in my old age because I understand the importance of figures. Unfortunately, dance is just not my thing, but coach took me on as a student anyway. You don’t see too many adult freestyle skaters at my age and you usually won’t see too many coaches that will even teach adults freestyle. My goal was to progress from where I left off at. I had always had trouble with camels and it terrified me to do doubles and axles as I had in the past. I had a lot of work to do and I needed lose a lot of weight. Within a year I had lost over 35 pounds and become almost as strong as I was when I stopped skating. I was still missing a lot. I still couldn’t do camel spins but doubles and axles had become easier for me.

As for my wife, a year had passed, and she had struggles with some of the simplest things. Trying to push off in figures, hitching for take offs, tracing the circles, dance, etc. She was frustrated and at the point where she was considering quitting. Now part of my wife’s issues ended up being equipment related. She started on a crappy pair of cheap skates she bought online. She eventually brought a used Reidell skate with an old Snyder plate. One thing I noticed was that the plate was too small for the boot. We got her a Roll-Line Variant Plate and when I went to Nationals in July 2017, we got her a custom-fitted EDEA boot. We also got her some Roll-Line Giottos wheels. Despite her having a great setup, she was still having trouble pushing on take offs, hold edges, etc. I ended up trying her wheels out one day and they were skating like someone had dipped them in butter!  While she had skated on them for several months, they never got broken in. I ended up skating on them and had just as many issues pushing as she did. I wore her wheels for a week to break them in. Now equipment was no longer an issue, yet she was still having plenty of problems with all the things she had been having problems with. Part of the problem was she was used to doing things wrong for so long that it became a habit and we all know some habits are hard to break. I even had my own habits that I had to learn to break. The other problem was that my wife was a very literal person. If you told her to drop her left shoulder, she would literally drop it. The coach really meant relax the left shoulder but because he said drop the left shoulder, she took it literally! She finally started asking me to watch her tell her what she is doing wrong. I learned long ago I don’t like to teach my wife anything because she gets too frustrated and I know she stops learning at that point but to my chagrin I did it anyway.

I’m a very analytical person and I try to break things down to the simplest form and then build it back up. It’s like taking a watch apart to see all the pieces, find out how it ticks, and then put it all back together. For months I had already been recording myself doing freestyle and analyzing what I’ve been doing wrong to improve my techniques. It was working for me, so I did the same with my wife. Oh, I got yelled at a lot. I would see something and tell her to do it differently, but I would get, “that’s not what coach told me to do.” Coach and I were telling her the same thing different ways, and she was taking us both way too literal! I needed to find another way to make it easier for her to understand what we were saying.

I started skating at the age of 17 and competed in artistic rollerskating events for several years. I took a break and now in my 40’s, I’m still jumping and spinning better than every. This website is about my journey on how I’m still improving my skill.

Copyright © 2020 The zen of rollerskating by mark warren